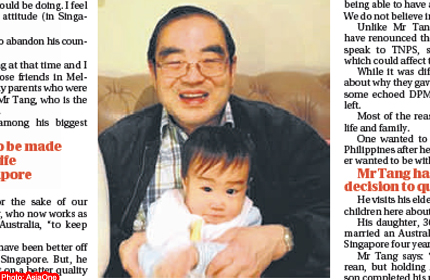 ​
When Mr Ivan Tang was agonising over a decision to leave Singapore in 1988, he was torn between his family roots and greener pastures.

He chose to take the leap and moved Down Under. The tipping point: The education system and quality of life here.

Mr Tang and his wife later renounced their Singapore citizenships in 1995.

His reasons were similar to those cited by Deputy Prime Minister (DPM) Teo Chee Hean in Parliament last week. He revealed that an average of 1,000 Singaporeans gave up their citizenship every year between 2000 and 2010.

He said they did so for various reasons such as preferring a different living environment or to reunite with family members overseas.

Mr Teo, who is also Home Affairs Minister, was replying to Mr Pritam Singh (Aljunied GRC), who asked for the number of Singaporeans giving up their citizenship and also whether there were plans to address the reasons that Singaporeans emigrate.

In his written reply, DPM Teo said the Government focuses on not only developing an attractive living environment and a thriving economy that provides good jobs, but also strengthening the bonds that Singaporeans have with one another and the country.
It will also continue to engage Singaporeans studying and working abroad such as through the Overseas Singaporean Unit, he added.

Mr Tang, now 60, relocated his family to Melbourne, Australia, when he was promoted to regional marketing manager with Miles Laboratories for the Asia-Pacific region in 1988. His daughter was then 12 and his son was 10. Both his children attended primary schools here before the family left Singapore.

I quit S'pore for my kids

Loyalty is overrated. We all know it.

where is the LOYALTY TO COUNTRY? where oh where
You must log in or register to reply here.