A Look At The (Not So) SMRT SocMed Communications Strategy

Anyone that has even a vague acquaintance in Singapore knows that this week has been filled with monumental difficulties for the tiny island city state: the trains stopped working. Now this might be at most an inconvenience in most other cities around the world, but in Singapore this is a national disaster. In a country where people complain vehemently if a train is even 1 minute late, the thought of their pride and joy – the best public transport system in the world – not working because of faults along three of the four lines was an unprecedented humiliation.

The crisis was made worse because in this technology -obsessed nation many people turned to their social networks to complain and rant. Unfortunately SMRT Corporation, one of the companies that administer the train service, wasn’t actively involved in any of the major platforms during the crisis: they were caught asleep at the wheel and by the time they woke up their entire PR and communications strategy had run off the rails. So, what did they do wrong and what can you learn from their mistakes?

The Lead up
Singapore has 4 train lines each identified by a colour: Red, Green, Purple and Yellow. Three of these lines, Red, Green and Yellow, are run by SMRT. The fourth, Purple line, is run by SBS Transit, which is owned by ComfortDelGro – the largest taxi company in Singapore (and second largest transport company in the world).

Just days before the train problems began, ComfortDelGro and SMRT, which also runs a fleet of some 3000 or so taxis, announced a fare increase starting in January 2012. Singaporeans took to their social networks to complain about the hikes.

However neither company chose to use their social media platforms to combat the negative sentiment. The online torrent of negativity continued unabated.

First Incident
On December 14th there was an early morning disruption on the Yellow line. Although service was quickly restored there was a backlog of passengers as extra peak hour trains couldn’t be deployed in time.

Many complaints were made across the social platforms but still SMRT didn’t respond. The fact that the incident took place at 6am, and SMRT’s Twitter account listed as them operating between 9am and 6pm Mon-Fri, may have had something to do with it. 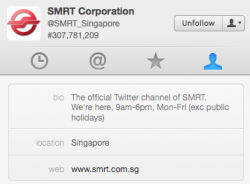 Second Incident
The evening of the very next day saw another incident. This time it was the red line that had a major disruption. Not only was a large portion of the rail network rendered inoperable by a power rail being damaged, but 4 trains were left without power, trapping 1000 passengers without ventilation or lighting for over an hour. Some passengers needed to be conveyed to hospital after they were rescued.

Singaporeans were understandably livid and took to social media to vent their outrage. Photos of train windows smashed for ventilation and the journey back to the station up the blacked-out rail tunnels quickly emerged online. 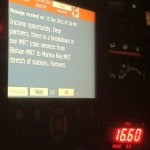 To make matters worse all SMRT taxi drivers were sent a message: Income opportunity. Dear partners, there is a breakdown in our MRT train services from Bishan MRT to Marina Bay MRT stretch of stations. This was photographed and uploaded to Twitter causing outrage in the face of the fare increases.
Throughout this SMRT remained silent about the incident, the official Facebook page continued to wax lyrical about competitions and voucher offers while completely ignoring comments by fans about the disruption.

In such an information vacuum trolls flourish and one soon emerged.

Third Incident
On the morning of the 17th December, 2011 the Red Line was once again disrupted, a similar cause to the events on the 15th. It took 7 hours for the problem to be fixed and social networks were full of ridicule – much of it aimed at the SMRT CEO, Saw Phaik Hwa. Some wits claimed that SMRT stood for She Must Resign Today and other similar abbreviations, while others referenced popular memes including Skyrim’s arrow to the knee. It was an online party at SMRT’s public relations expense.

She Must Resign Today​

For much of the chaos the only online response came from SMRT Ltd Feedback Facebook page. The responses were often subtly antagonistic (see image below). Unfortunately for SMRT this account is faked: a troll, that revelled in the lack of official responses.

The troll played their role perfectly which added to the fear, uncertainty and doubt. Many people were deceived including some reputable social media commentators. The crisis deepened. 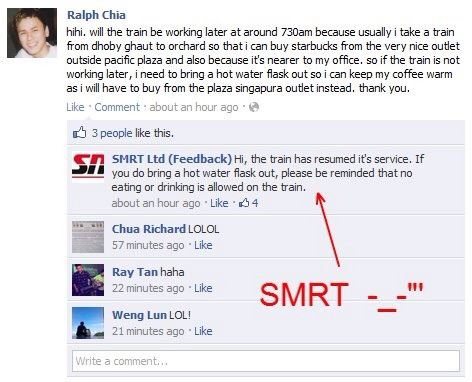 It wasn’t until early afternoon that the SMRT communications team really swung into action. The twitter account began providing information and responding to people. However, the official Facebook page still only issued vague warnings about the troll’s page. It appeared as though they weren’t entirely sure that the troll wasn’t part of another division or similarly sanctioned official account. This left fans even further confused. It wasn’t until 11pm that night that the Facebook account began responding to the situation and providing practical information. At least fifteen hours too late.

Despite there being an extended outage on the Red and Green Lines to completely examine the rails, there have been no further major incidents involving SMRT. However the damage has been done. The CEO, already derided because she ‘proudly’ doesn’t use public transport, is a laughing stock and if she doesn’t resign the government inquiry into the disaster will undoubtedly call for her head. They fact that she has remained almost invisible during the crisis is suggestive of just how redundant she truly is.

There has been an intrinsic communications failure across the board. Not just using social media to communicate and liaise with the public, but also within the organisation itself. Crisis require quick, decisive action not delayed meandering. Employees need to know what to do, how to do it and when. Plans need to be constructed and tested long before any crisis developed not cobbled together hastily in the midst of the proverbial hitting the fan.

Meanwhile, Singapore is slowly adapting. The trains are forced to drive slower now which means that there are delays and more crowded trains. The seeming dallying in paying any form of compensation to its users has means that the ridicule, both online and off, continues unabated.

Being government protected, SMRT will no doubt survive this. Hopefully the lessons learnt will not be in vain: that any company in the service industry needs to be progressively customer focused, not just concerned with protecting executive jobs and bonuses.

I must say i'm impressed by the troll. at the start, he played well to stir shit. even as he continued trolling non stop, i believed many people got fooled into it. esp the older generations or those unfamiliar with internet trolls. 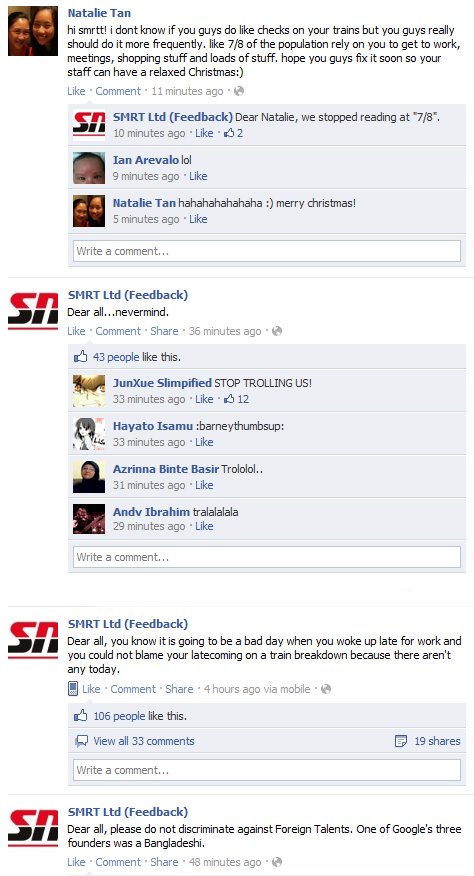 the SMRT feedback page - the one that trolls - is not using the official SMRT logo. there is a slight difference in the circle image

i rmbr a few days back the SMRT feedback fb account posted this status update of how they fired the "guy that posted irresponsibly" i half suspected that it was another troll msg
You must log in or register to reply here.