Article An In-Depth Look at the Spartan 300 Workout 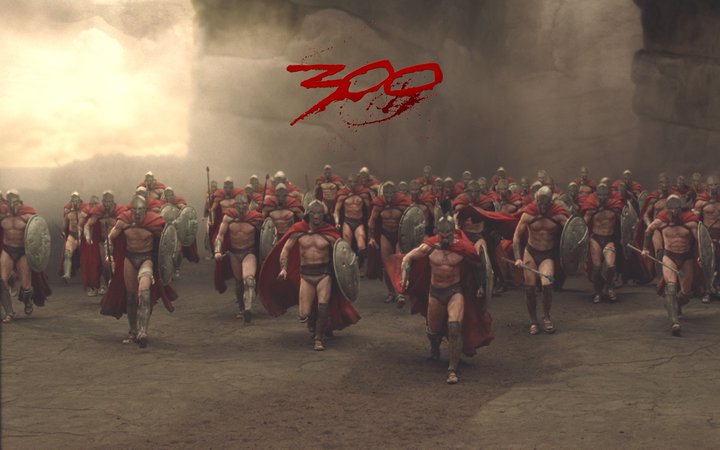 The film 300 was a box office hit, grossing over $300 million. But it wasn’t just the film that was getting all the attention-there was just about as much talk about the actors’ incredibly sculpted physiques as there was about the movie’s plot, acting, special effects, or anything else. Women just wanted to stare and dream and guys wanted to know what they did to get in such great shape.

It’s said that the guys whipped themselves into shape doing a training regimen that included 50 reps each of six different exercises with no break between sets-for a total of 300 reps. This grueling training routine came to be known as the Spartan 300 Workout. But was this really the routine the guys followed in order to prepare for their roles? Yes and no.

It took some digging to get to the bottom of what really went on but what I discovered is that the 300 rep workout was only a small part of their training regimen. I can tell you thought that the guys did spend at least six hours every day in the gym.

First, you want to understand that the guys in the film were all in really good shape before they auditioned for the roles-casting directors aren’t in the habit of picking dumpy out-of-shape guys for roles like this because they see their “potential.”

The actors’ training routine lasted about four months and was developed by renowned trainer Mark Twight. Since he wanted the guys to actually look and act like real Spartan warriors, he incorporated techniques that would emphasize the fighter qualities rather than just building muscle. He didn’t want the actors to look like pumped up bodybuilders.

The actors trained in competitive group sessions that included a system of penalties and rewards. Physical training focused on developing athleticism, using a variety of ever-changing routines that combined compound movements, lifting and throwing and relied upon non-traditional equipment such as medicine balls and kettlebells rather than machines or even free weights. The same session was rarely repeated.

The point of the regimen was to improve all around fitness using a wide variety of movements that developed the ranges of motion required in real fighting. This was accomplished by submitting the body to ever-changing-and increasingly difficult-physical challenges. Preparation for the roles also included eight weeks of daily fight training.

No surprises here-their diet was very strict and focused on fueling the actors’ bodies with plenty of lean proteins, limited carbs and only healthy, unsaturated fats. Anybody who fell of the “diet wagon” was admonished by his fellow actors-en masse-which was part of Twight’s plan of having the guys train together as a cohesive group.

Now, back to the Spartan 300 Workout. What I uncovered was that this legendary routine wasn’t done daily, weekly or even monthly. Rather, it was presented as a challenge at the end of the four-month training regimen. From what I understand, only about one-half of the actors actually completed it successfully.

Here are the components of the Spartan 300 Workout Challenge followed by explanations of how they did the floor wipers and the clean and press:
Floor wipers: This exercise builds core strength and works the abs. Load a barbell with 135 pounds and lie on the floor. Press the barbell up, extending your arms all the way and holding in that position. Keeping your legs straight, touch your feet to the right side of the bar and then to the left side to complete one repetition.

Single-arm clean and press: If you’re not familiar with them, a kettlebell looks like a cannonball with a handle. If you don’t happen to have one hanging around, you can also use a 35-pound dumbbell. With your legs shoulder-width apart, set the kettlebell on the floor and grab it by the handle. Bring the weight up in front of your shoulder, elbow bent and pointed down. Press the kettlebell up towards the ceiling. Without pausing, bring it immediately back down to your shoulder and then lower it back to the starting position, with the weight on the floor-repeat (49 more times).

If you’re looking to replicate that “300″ look, you can take the basic elements of what these guys did and come up with your own routine and get the same basic results. Mix up your training and incorporate bodybuilding exercises, fighting exercises, dumbbells and even kettlebells. Be sure to add plenty of exercises that build and strengthen your core. Set a goal for yourself to do your own version of the 300 rep workout, lowering the number of reps or swapping out some of the exercises. Do something that’s challenging but not so tough that you wind up in the hospital. But do set a goal. It gives you something to strive for and helps keep you on track.

about the author: Mike Westerdal runs CriticalBench.com. Mike is an amateur powerlifter competing in the APF and APA federations, and has played and coached football in Europe.
image source: facebook

This routine a bit hardcore ah

I can tell you thought that the guys did spend at least six hours every day in the gym.
Click to expand...

Quite alot of work for such a bod.. The 300 guys look jacked but not really that over the edge kind of jacked. still see some fatty areas :X

It's not a routine. It was a one-off thing for them to determine their own individual levels of fitness.
You must log in or register to reply here.