Article Analysis of The Squat

Some physicians condemn the squat, citing how destructive they are to the knees, despite scientific studies and millions of personal experiences to the contrary. One sports medicine doctor explained to me why squats were considered to be bad for the knees. He was actually telling me this between his sets of squats! Since sports medicine doctors only see people with injuries one can guess why they may have developed this belief. The individuals they treat certainly do not constitute a random sample, let alone a representative population which, as any scientist knows, is essential to even attempt to formulate inferences.


"Some reports of high injury rate may be based on biased samples. Others have attributed injuries to weight training, including the squat, which could have been caused by other factors. Injuries attributed to the squat may result not from the exercise itself, but from improper technique, pre-existing structural abnormalities, other physical activities, fatigue or excessive training."​
​
An early study suggested deep knee bends with weights (squats) were hazardous to the ligamentous structures of the knee. Later studies conclude squats improve knee stability if the lifting technique does not place rotary stresses on the knee (Fleck and Falkel, 1986). The NSCA state:


"Squats, when performed correctly and with appropriate supervision, are not only safe, but may be a significant deterrent to knee injuries."​

Contrary to propaganda, prominent weight training authorities demonstrate the squat with the knees flexing forward at the same distance as the hips flex backwards. Fredrick Hatfield, Ph.D., the first man to squat over 800 lbs, recommends the knees to extend over the feet with the back more upright for quadriceps development. "Strength Training for Young Athletes" by Steven J. Fleck, PhD and William J. Kraemer, PhD, illustrate parallel squats with the knees extending beyond the feet (knees moving forward with same magnitude as the hips moving backwards).

Torque force is necessary for the muscles and joint structures to adapt to the respected overload. If the knee does not travel forward during the barbell squat, the quadriceps muscles (ie: knee extensors) are not significantly exercised. On the other hand, injury may result if the knee or lower back experience greater torque forces than to what they are accustomed.

Fry et. al. (2003) examined the hip and knee torque forces of variations of parallel barbels squats and concluded appropriate joint loading during this exercise may require the knees to move slightly past the toes. 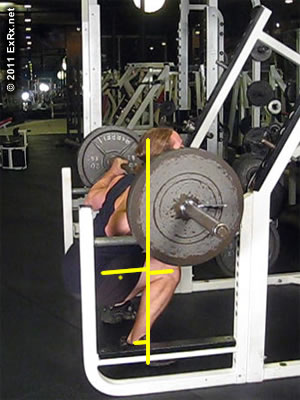 During the execution of a barbell squat, the knees and the hips travel in opposite directions away from the foot, or away from the center of gravity. Torque forces increase as the exerciser desends. The greatest torque forces are experienced when initiating the rise out of the bottom position.

Try this simplified qualitative method in determining relative torque forces in the knee and hip joints. First take a photograph of the barbell squat in a full descent with a perspective perpendicular to the joints plane. Draw a line of force through the resistance on its center of gravity, straight up and down, parallel to the force of gravity. Gravity acting on both the body mass and added mass (barbell) contribute to the resistance. Incidentally, compression forces act upon the joints during the squat stance. On the barbell squat, the center of gravity is over instep (between the forefoot and heel). If it is not, the individual will fall over, toward the center of gravity.

Now draw three seperate horizontal lines, perpendicular to the line of force. from each joint articulation (ankle, knee, and hip) to the line force. If the image is not exactly viewed from the side, the "horizontal" lines can be drawn in perspective to picture as shown. Once the diagram is complete, a relative comparison can be made on the torque forces of the hip, knee, and ankle.

Typically the torque forces in the barbell squat are slightly greater for the stronger hip joints as compared to the knee joint although both the knee and hips travel in opposite direction away from the line of force. Generally speaking, during a powerlift type squat (bar lower behind the shoulders and a wider stance) the knee does not travel forward as far as a bodybuilding type squat. The hips typically travel back further with the torso bent forward on a powerlift type squat. This emphasizes the stronger hip extensors and adductors and consequently reduces knee extensor involvement. Knee torque is further reduced by a wide stance.

The practice of adopting foot rotation to selectively strengthen individual muscles of the quadriceps is not supported by the literature (Boyden 2000; Signorile 1995). Knee rotation during the squat can increase the risk of injury (Fleck and Falkel, 1986). Signorile, et. al. states:

"Extreme outward toe point greatly reduces stability, it does not allow the proper drift of the hips as the lifter descends... Extreme inward toe points are equally dangerous, coupling the same problems of stability, base size and lower body drift with the added danger of bringing the knees together...this movement would place high stress on all connective tissue."

Kreighbaum (1996) illustrates the safe position of a deep squat with the knees extending beyond the toes. Kreighbaum explains how a deep squat can be performed little chance of injury to the knee. The variables of concern:
The primary danger to the knee occurs when the tissues of the calf and thigh press together altering the center of rotation back to the contact area creating a dislocation effect. The danger of knee injury in this situation may be prevented if either of the following factor are present:
Kreighbaum concludes the deep squat is of little danger to the knees unless these variables and factors are disregarded. Certainly only a limit type of athletes and performers may have a the need to perform a full squat. Olympic weightlifters commonly bounce out of a full front squat with near maximum resistances during both the Clean & Jerk and Snatch. Incidentally, the wide stance during an Olympic-style squat further reduces knee torque forces. Reportedly, those proficient in the Polzunec movement in the style of the Ukrainian national folk dance appear to experience few orthopedic problems (up until middle ages where their incident of orthopedic problems seem to be no greater than the general population) despite their ability to perform a seemingly contraindicative movement for decades; body upright, bounding from one leg to the other in the deepest squat position. Also see Over Generalizations.

The squat can decrease knee injury (NSCA) and increase leg power (Adams, 1992) when implemented into a sound strength and condition program. Early in the off season, squat training will develop the foundation for more sports specific training, such as plyometric work. See Conditioning Work recommendations.

The strength and conditioning coaches may choose from a variety of squat movements. The type(s) of squat(s) prescribed should prepare the athlete for specific biomechanical stresses demanded by the sport as well as other conditioning exercises. Coaches commonly prescribe the powerlifting squat (wide stance, bar low on back, little knee torque) at exclusion exercises with greater knee torque, namely the Olympic style front squat and the bodybuilding style squat. Coaches cite the importance of hip extension strength and power. The Glutes are after all the most powerful muscles of the body.

Exercises that are most beneficial for sports performance are generally those that are similar to the type of forces and counter forces experienced on the playing field. See Training Specificity and Resistance Training for the Reduction of Sports Injury. The coach must consider the unique biomechanic requirements of the sport, as well as the requirements of each athlete's position. The hip/knee/ankle torque ratio should be similar to actual biomechanics experienced on playing field. Motor skills such as blocking, jumping, leaping, etc. generally involve greater knee and ankle torque than what is required of the traditional 'powerlifting' squat. The 'bodybuilding' squat and power training such as Olympic-style weightlifting and plyometrics, require a higher ratio of knee/ankle versus hip torque than the 'powerlifting' squat.

Conversely, some coaches cite knee injuries as a reason to avoid any other squat than the 'powerlifting style' squat when in fact the risk of knee injury may be attributed to other factors. See squat safety above and Exercise Safety: Causes of Injury and Sports Conditioning.

​
If the body has not adapted to a greater torque force, injury can result. It is not necessary to avoid the torque force if the muscles and joint structures can adapt. See adaptation criteria. Of the hip and knee joint, the knee is more vulnerable to injury than the hip due to structural and functional differences. Certainly, if an individual has had a history of knee pain associated with these types of movements, the squat can be modified to to place more torque on the hip and consequently less on the knee joint. Based on the above analysis, this can be accomplished two ways. Simply, by not squatting down all the way (e.g. 90°) both the knees and hip do not experience as great of torque forces. Although, this decrease is may be off set by the tendency to add more weight to the exercise. Alternatively, by bending at the hip more than the knee, the knee will travel forward less, as in the powerlifting type squat. Recall, the quadriceps will not be exercised as intensely since there is less torque on the knee joint. In addition, since balance must be maintained over the feet, bending over not only transfers more torque to the hips, the torque forces through the spine (lower back) increase, another vulnerable joint for some. Certainly a compromise must be made to evenly distribute the torque force between the knee and the hip/lower back, particularly when both the knees and lower back are healthy.

​
If the ankle is not flexible enough to allow the knee to travel forward sufficiently, the back will need to be bent forward more to maintain the center of gravity within the foot base. Consequently the lower back with be subjected to greater torque forces. Squatting with the feet wide apart can alleviate part of the problem, allowing the back to be positioned more upright. This solution does not, however, distribute equal stresses on the quadriceps and glutes as would be possible with adequate ankle flexibility.

​
Until flexibility can be restored, a temporary solution is to elevate the ankles on a board or platform. This will allow the knees to travel forward the same distance as the hip travels backwards. Elevating the heels may present a risk to individuals with adequate ankle flexibility who have not adapted to greater torque forces through the knee. In which case, the knees can potentially travel forward more than what they are accustomed to. Even when elevating the heels with insufficient ankle flexibility, resistance should begin light and progress only 5-10% every workout until a true workout weight is achieved, so joint adaption can occur.