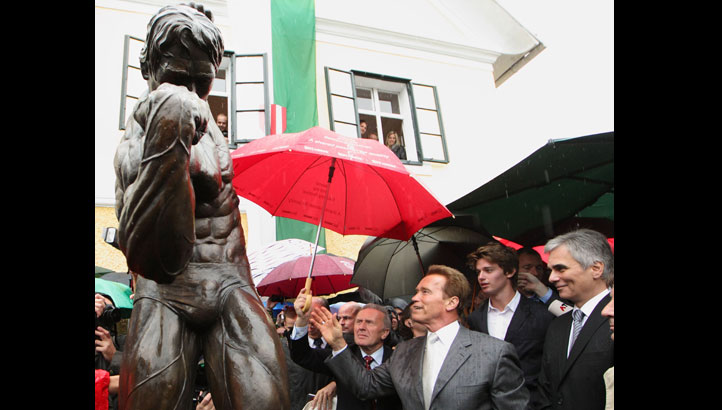 THAL, Austria (AP) - Arnold Schwarzenegger has a message for young people aspiring to success: 'Stay hungry.' Schwarzenegger invoked the title of one of his early films on Friday in an inspirational speech formally inaugurating the museum chronicling his life.

He was born in the town of Thal, just outside Graz, Austria's second-largest city.

Schwarzenegger described the museum as a 'symbol of will,' attesting to the fact that 'everyone has a chance.' He also unveiled a bronze statue of himself showing him flexing and in trunks as the young bodybuilder from Austria who went on to Hollywood glory before becoming governor of California.

Schwarzenegger, who is in the middle of divorce proceedings from Maria Shriver, said their wedding was one of the many things 'which I remember fondly.'

it that veins on that black statue? look damn sick siol

It's highly detailed. you can even see his 'outline' on the trunks <_< damned craftsman are THAT skilled
Reactions: prosu

arnold looks so happy, didn't even care about the rain
Reactions: pitdog

Maybe it is the camera angle, but his wrist looks exceedingly gigantic!

the rain is making the statue wet and extra shiny
You must log in or register to reply here.