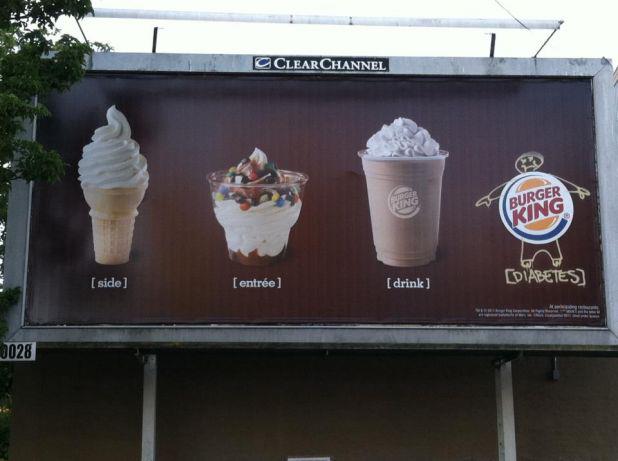 Someone has graffitied this Burger King billboard in downtown Seattle to transform it into criticism about how sugary fast food contributes to diabetes and the obesity crisis.

The original billboard does that classic advertising trick of getting away with making a joke while still promoting an idea that's not so great for you, which is to eat more deserts at Burger King.

The billboard shows an ice cream cone, a parfait, a milkshake and then a Burger King logo. Underneath the items in progression it says "side," "entree," and "drink." To modify it into a commentary, on the logo, the vandalizer drink a bloated person with a frowny face and x-ed out eyes. Below it they scrawled, "diabetes."

I am not saying that graffiti is right, but I am glad that someone was willing to send a message to us that we clearly need!
Reactions: luXy

Haven't seen that burger king billboard before. Some advertisements are so stupid that they are enticing people to troll.

makano said:
Haven't seen that burger king billboard before. Some advertisements are so stupid that they are enticing people to troll.
Click to expand...

Rofl. Yeah it looks like the trolling backfired burger king's ad in this case.

That's the best kind of graffiti right there, nice find.

Nice that the Burger King ad becomes a campaign ad against obesity and diabetes. lol
Business will do anything to gain money even it will cause diseases to the possible customers. Just like cigarette companies.
You must log in or register to reply here.