Creatine is a substance that helps increase energy at the cellular level. Without getting too technical we'll examine how this works. Creatine supplementation has become a science of its own. There are many different theories about whether it works or not, and how it works.

When we look at energy at a cellular level it is created by the creation and breakdown of chains of molecules. ATP (adenosine tri-phosphate) is one of these molecular structures. There are three phosphates attached to the molecule. When a phosphate is separated from the ATP molecule energy is released from the breaking of the connection. This energy is used by the cells. The molecular structure is then changed and what was once ATP becomes ADP (adenosine di-phosphate) with only two phosphates attached. This new molecule begins searching for a free phosphate somewhere to reattach.

The muscles go through three energy phases. The first, and the one we are looking at, is the ATP-PC system where ATP is broken down for energy and rebuilt. This system is the immediate energy system and according to some research can last as long as three minutes, or until all ATP is depleted and there are no free floating phosphates. The next system is the lactic acid system in which the various metabolic processes produce energy and give off lactic acid.

This system last approximately ten to twelve minutes and then the aerobic system kicks in. This system carries the body's energy needs over extended periods. It is important to note that one system doesn?t stop when the other takes over. They do overlap and the ATP-PC system kicks in every once in a while.

With all of the technical stuff out of the way, let's look at Creatine and what it does. Creatine introduces phosphates into the energy cycle allowing ATP to be built for a longer amount of time. It is also believed that the body will produce more stored ATP for future use with regular supplementation of Creatine. This allows for a more explosive muscular contraction and a longer lasting ATP cycle. This is important because the muscle contractions are more intense and stronger during the ATP energy cycle.

Creatine is also said to pull more water into the muscles giving them a fuller appearance. This added water also provides more leverage and aids at the cellular level. This increase in water uptake can be dangerous if a person does not drink adequate water during use. Making sure to drink plenty of water keeps the body from becoming dehydrated and enhances the efficiency of the creatine.

There are many different versions of creatine on the market and each claim to work in a different, but better, way than the others. Any product that will introduce more phosphates at the cellular level and increase energy production and release will benefit muscular energy and strength. Whether you are looking for more power while lifting, more explosive take off when sprinting, a longer work capacity or fuller muscles creatine can be an asset to your program.

Side Effects and Safety Concerns
In the Cochrane Collaboration analysis of 12 trials, there were no notable adverse events reported, however, research on the side effects and safety of creatine supplements is still limited.

Possible side effects of creatine include:

Creatine may cause water to be drawn away from other areas of the body and into muscle tissue, which could increase the risk of dehydration.

High doses of creatine could potentially injure the kidneys, liver and heart. Theoretically, creatine may cause kidney damage because its by-product, creatinine, is filtered through the kidneys into urine. Although studies haven't found adverse events in recommended doses, there have been a couple of case reports of people who have experienced kidney collapse and three deaths in people taking creatine, but there is no definitive evidence that creatine was the cause. People with kidney disease or liver disease should avoid creatine.

Creatine supplements may cause asthmatic symptoms, such as wheezing and coughing, in some people.

People with a condition called glycogen storage disease type V, also called McArdle's disease, shouldn't use high doses of creatine because it has been found to increase muscle pain.

There is some concern that oral creatine supplements are metabolized in the body to a toxic waste product formaldehyde, which could potentially damage cells, DNA molecules and blood vessels.

Pregnant or nursing women or children should not use creatine supplements.

One of the main safety concerns is that individuals using creatine to enhance athletic performance or muscle mass, particularly adolescents, may exceed recommended dosages and take without supervision.

Possible Drug and Supplement Interactions
Because creatine could theoretically affect kidney function, it should not be taken with prescription drugs that could also potentially affect the kidneys, such as aminoglycoside antibiotics (Amikacin, tobramycin, Nebcin), immunosuppressant drugs such as cyclosporine and non-steroidal anti-inflammatory drugs such as aspirin, ibuprofen (Motrin, Advil), naproxen (Naprosyn, Aleve).

Creatine supplements should not be taken with the herb ephedra because of increased risk of side effects. There was one case of stroke in a person taking creatine and ephedra. Although there was no definite link between the combination of herbs and the stroke, it is best to avoid the combination. 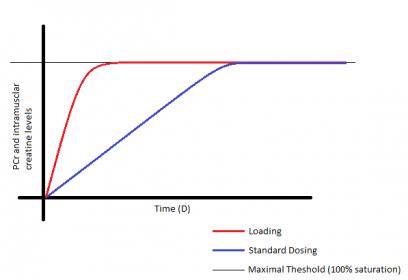 source: exrx​
Reactions: roflolmao
You must log in or register to reply here.