Do you believe that gaming addiction can now be called as a health risk?

Well there are still people debating whether gaming addiction can really be called as an addiction just like on how they are debating if facebook addiction is really true. For me, it should be called as an addition and a health risk if it is already interfering with your life and with the internet stories I have read, it is even worse than having a smoking addition or a drinking problem. What is your opinion on this one?

Yes it is a health risk when you put almost all your mind and soul into the game. When that happens, you will put gaming into the top few of your life priorities, which in turn will lead to lack or exercise, bad diets and very unhealthy habits.

For those who are addicted to gaming, here is a video I would like to share. Hope it helps.

It is surely a health risk this happens: 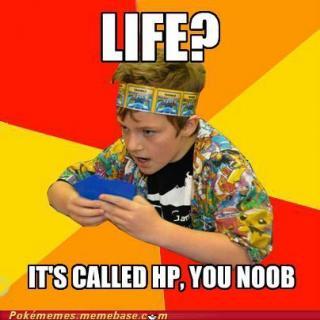 I think anything that is out of balance has the capacity to be unhealthy and a possible 'addiction'. The word addict is used very loosely in today's culture but then again, we are probably the most unbalanced generation to date (I am speaking in general terms....often difficult to do, but necessary in order to progress).

There is a lot of talk about people being addicted to exercise etc...Again, I feel it comes down to basic balance and living your life in all the quadrants. That is my 2 cents on the subject.

gaming addiction is definitely a health risk. some games like WoW requires so many hours a day to upkeep a virtual character.. well, many people are addicted to Facebook too. but if you're not playing games on Facebook, i doubt the addiction to social networking can actually be that detrimental to ur health.

sinful said:
Yes it is a health risk when you put almost all your mind and soul into the game. When that happens, you will put gaming into the top few of your life priorities, which in turn will lead to lack or exercise, bad diets and very unhealthy habits.

For those who are addicted to gaming, here is a video I would like to share. Hope it helps.

Great animation! But... I know all the games that is seen in this animation does this mean I am addicted too? Well I do agree on what he is saying but what he did is unhealthy gaming or addiction.

The video is simple but speaks a good message. I like how it's really easy to understand and the narration by a former gamer makes it all the better. Good video for the addicted.

makano said:
Great animation! But... I know all the games that is seen in this animation does this mean I am addicted too? Well I do agree on what he is saying but what he did is unhealthy gaming or addiction.
Click to expand...

Nah ure not addicted just for knowing those games! Unless u play em night and day and neglect everything else.

I think what he went thru was being unhealthy gaming. It was an unhealthy gaming addiction. He said he spent thousands of hours on games. And neglected almost everything else

That video nailed it. Gaming addiction can be a health risk if you neglect even basic things such as sleeping, eating, and can even greatly affect your social life. I was a gamer, and I was definitely addicted to it. I only stopped recently, and have come to realise how much time I actually spent on playing those MMORPGs. Now that I'm not playing anything I have loads of extra time in my hands. There are days where I only slept for 2 - 3 hours, ate only once or twice a day, and even refused to go out with friends. Then I look at myself in the mirror and see how horrible looking I've become. Not only that I wasn't fit, I wasn't healthy at all.

gaming can supplement your social life, occasionally u can hang out with some people to play LAN games, arcade etc. But you shd not spend hours and hours a day on it. when ordinary things gets boring and u just have got to go back to play the game all the time, u know u're addicted.

Yes, I would agree that gaming addiction is a "real addiction".
And that there are health risk because of being addicted to games requires too long hours of gaming/sitting in front of their computers and gadgets. They do not eat well or even do not eat at all just to continuously play. There are also some who had died because of game addiction.

Gaming addiction is just as much of a an addiction as any other, the heath risks are fairly numerous and serious, wonder if the Government will soon intervene with the number of Children now suffering from gaming addiction.

Best line - ' You only got 1 life '
Reactions: gosu_smurf

Check out this wired.com article on boot camps in china designed to fix an Internet addiction.

A short quote from the article:

The Qihang Salvation Training Camp opened in May 2009, just in time for the summer holiday. Children who attended the camp portray it as a horrific experience. Although Qihang pitched itself as therapy, its treatment regimen revolved around intense martial drills, which began at sunrise with a harsh whistle and sometimes didn’t end until after midnight. Campers who couldn’t complete the required laps or push-ups were beaten. Screams could be heard constantly. A 12-year-old boy, whose parents enrolled him for playing his Game Boy too much, says that he spent most of his time concentrating on mere survival: “If anyone says they weren’t scared, they’re lying.”

Deng Senshan’s fellow campers helped to re-create his first, and only, day at Qihang. Like all newcomers, the boy began his stay with a visit to a “confinement room” on the facility’s top floor and was told to face the wall. When he refused, counselors struck him. “I heard him screaming,” says a 13-year-old girl whose mother sent her after she started skipping school to chat online. “But I didn’t really pay attention, because it was normal to hear screams.”

When the other campers were sent to bed, around 9 pm, Deng Senshan and three other new arrivals were instructed to run laps around the basketball courts under klieg lights. By now, Deng Senshan didn’t resist much; he ran about 30 laps before he stumbled and fell. A counselor dragged him to a nearby flagpole and hit him with a wooden chair leg, which broke. Deng Senshan begged for him to stop, pushed himself up, and continued running. He made it halfway around the court before collapsing again. “Do you want to run?” the counselor yelled, strutting over with a plastic stool, which he swung down on the boy.

Deng Senshan crumpled to the concrete and stopped moving. There were at least a half-dozen witnesses. A security guard, who watched with shock from the tiny room where he lived at the edge of the school grounds, knew the child was in trouble: “I told my wife, ‘This boy will be lucky if he lives through the night.’”

After the beating, Deng Senshan was carried trembling to his bunk, shouting, “They’re killing me,” and bleeding from his mouth, ears, eyes, and nose. The counselors left him there for hours before dispatching a car to take him to the hospital. At around 3 am, 14 hours after arriving at the camp, he was pronounced dead.

It’s a September morning — the day that Deng Senshan would have started high school. His parents walk through crowded streets to their bright third-floor apartment. A month has passed since their son died. As they tell their story, Zhou Juan cries into her hands and Deng Fei fiddles with his keys.

Recently, Deng Fei came to a conclusion: His son was never addicted. “He didn’t smoke, he didn’t drink. The Internet was probably his way to vent the pressure on him,” he says, staring at his feet. “We didn’t know that then. But we know that now. It wasn’t really an addiction. It was his way out of the pressure of being a student.” Zhou Juan raises her head. “He didn’t even play that much,” she says.

More than a dozen people were jailed for Deng Senshan’s death, and it would later be reported that the camp founder — who had branded himself as an educational and psychological expert — had never even been to high school, let alone college. Deng Fei would also learn that the camp’s TV ad was a fraud — those smiling family members were actually paid actors.

Deng Senshan’s death was the first of a small wave of terrifying reports. A few days after his murder, counselors at a camp in Hubei province beat to death a 14-year-old boy. Six days later, a teenager ended up in intensive care after sustaining injuries at another camp. The reports sparked cries for a government crackdown. “No one regulates the industry,” says Tao Ran, who has become one of the foremost proponents for increased oversight. In late 2008, Tao, hoping to eliminate uncertainty and confusion, began publicizing what he believed were the defining characteristics of a true Internet addict: playing online for at least six hours a day for three months straight and experiencing a profound sense of emotional, even physical, loss when unplugged from the Net. He also began lobbying the Chinese government to officially recognize the condition as a mental illness. But he is up against a juggernaut. There are thought to be between 300 and 400 camps in China.

I believe that being addicted to video games or internet games is an addiction that needs to be treated. Facebook addiction is also an addiction that has been recognized by medical science and it's called FAD (Facebook Addiction Disorder). There are many ways that you can test if you're a games addict or a Facebook addict or an internet addict or any other kind of addiction. And with any kind of addiction, you cannot stop the activity all at once otherwise the addict would suffer withdrawal symptoms. So it needs to be done gradually.

Check out this article (an example of severe gaming addiction that kills),

"South Korean police have arrested a couple for starving their three-month-old daughter to death while they devoted hours to playing a computer game that involved raising a virtual character of a young girl.

The 41-year-old man and 25-year-old woman, who met through a chat website, reportedly left their infant unattended while they went to internet cafes. They only occasionally dropped by to feed her powdered milk."

full article: http://www.guardian.co.uk/world/2010/mar/05/korean-girl-starved-online-game
You must log in or register to reply here.