If you’re overweight, the straight truth is this: You’re overfat.

Your excess weight is unlikely to be the result of too much muscle or too much water, unless you have a medical condition. It’s a result of too much body fat, which has to do with either the size or number of fat cells in your body. You might have too many fat cells, or you might have a normal number of fat cells but they’ve grown to size X-large. You could also have too many X-large size fat cells!

Fat Cells are Created When We Gain Weight

Scientists once thought we could only grow new fat cells during certain stages of life, such as the first year and puberty. Now it seems we can create them as adults, too. If you’ve gained a lot of weight as an adult, you may have added to your store of fat cells. That makes it harder to lose weight because, once they’ve taken up residence in your body, fat cells never go away. 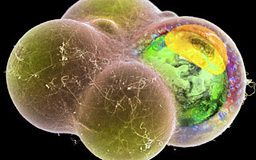 When a fat cell grows to about three times its normal size, it can divide and make new fat cells. How much fat a cell can handle before it divides varies from person to person. You can shrink the size of your fat cells but you can’t shrink the number.

If you have more than your fair share of fat cells it’s going to be more of an uphill battle for you to lose weight than for someone with fewer fat cells. That’s just how things work. But nothing’s impossible.

Researchers studying the effects of diet and exercise on fat cell size at Wake Forest University School of Medicine in Winston-Salem, North Carolina, recently discovered that exercise, perhaps more than diet, can help reduce the size of fat cells that accumulate around the waist.

They all lost weight, reduced their overall percentage of body fat, and reduced the size of fat cells in their hips. However, those who used diet alone did not shrink the fat cells around their waist while both exercise groups shrunk their waistline fat cells by 18 percent.

Losing waistline fat is particularly important to anyone who carries their weight around their waist rather than below. If you look in the mirror and you see yourself more as an apple shape than a pear shape, then you carry your weight around your waist. That puts you at higher risk of developing early heart disease, diabetes, high blood pressure and other chronic conditions.

If you eat less and exercise more, you’ll not only lose weight, you’ll reduce your health risks as well.

This is why the GFH (get fucking huge) approach is flawed. Bulking pass a certain bf% will lead to fat cells multiplying with no way to reduce the number making it that much harder to cut back down to a lower bf%. Good post.

But don't many people, actors and athletes included, do bulking programs? The fast track to gaining muscle via bulking may outweigh the difficulty cutting back the bf %.
You must log in or register to reply here.