Just in case you still think that good grades equal success in life, read this - A decent article on the straits time forum page from a parent: 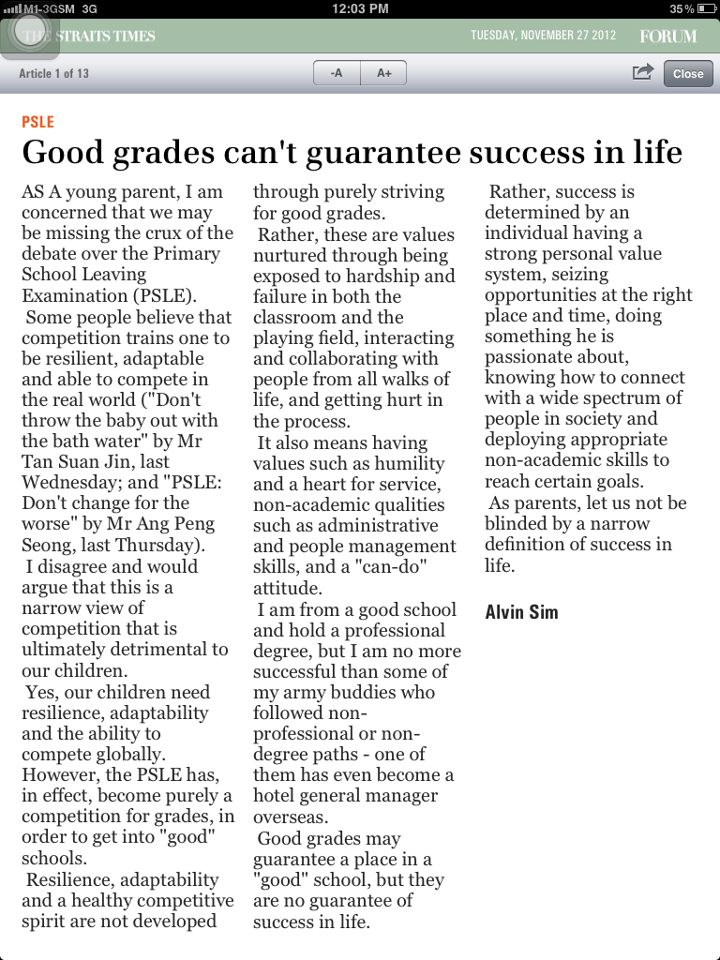 "Success is determined by an individual having a strong personal value system, seizing the opportunities at the right place and time, doing something he is passionate about, knowing how to connect with a wide spectrum of people in society and deploying appropriate non-academic skills to reach certain goals."
Reactions: sinful

Very true. Many a times grades alone would not suffice for success. It's a combination of many factors and opportunities.

The 5Cs (credit card, cash, car, condominium and country club) used to be the benchmark that Singaporeans measure their success upon. The following was written by Christopher Ng Wai Chung (read more of his stuff @ Growing your tree of prosperity).

Even better than having a credit card, cash, car, condominium and country club are the three E's of Singaporean success.

Stanley Liew, 32, has everything to celebrate about. As recipient of a government scholarship to one of the top Ivy League colleges in the US, Stanley was not only able to have for himself a world class education, he was also to bask in the warm glow of being a prestigious government scholar in Singapore.

Of course, like many people who excel at looking out for number 1, Stanley was also able to break his scholarship bond with the help of his immensely wealthy family. After all, being a highly paid bureaucrat was attractive but not good enough for a man of his status. And after a very profitable 3 year stint as a management consultant, Stanley takes over his multi million dollar family business. His past as bond breaker is now readily forgiven, since he is now someone who is responsible for hundreds of jobs in Singapore.

You see fragments of Stanleys everywhere in this country. Sometimes they appear in the Singapore Tatler, sometimes they get involved in local politics. Stanley is the archetype of a successful Singaporean.“ all the woman want him and all the men want to be like him.

You can love the metaphorical Stanley. But very likely, you can also hate him. Stanley is the kind of person whom we need to cope with in a society which is rife with status anxiety and envy. People like Stanley challenge us because he forces us to come to terms with our own inadequacies and forces us to mature and mellow with the coming of age.
Thus, Singapore loves three kinds of people, and Stanley just happens to have all three of these traits. These traits are known as the three E's of success. Without a doubt, the 3 E's are much more important than the 5 Cs in this materialistic world that we live in.

A person with 3 Es is educated, endowed and enterprising.

Educated
Education is the carte blanche towards a good life but has seen a lot of decline over the years. Educated people hold the best jobs in the economy and do not really need to take a lot of risks to thrive in this world. Motivational books and books on financial planning will always play down the value of a good education in favor of being street wise but in reality, education confers many advantages which can be very unfair to every one else. In countries like Japan, seniors from top universities in Tokyo have been known to cover up the mistakes of their juniors because they came from the same institution as they did. French presidents almost always hail from the Ecole National Administration ( ENA ), an elite school which grooms the cream of French politics for a top role in French society.
Most motivation books succeed by attacking educated people but fail to qualify and explain why an education, may prevent a person from accumulating wealth. The main reason of the lack of success for some is not because of education but his lack of an ability to apply the principles towards his own success.


Endowed
The other facet of success is an endowment. Successful people come from well endowed families because unlike the good old days having money makes a bigger difference in the lives of many school kids today. The best computers will allow them to keep in touch with the latest news on the internet; the best tutors will plug any of their weaknesses in class.

And the government encourages the transfer of wealth across generations. Singaporeans today are levied one of the lowest inheritance taxes in the world and the rich are lobbying to have these taxes scrapped. So the simplest secret to becoming wealthy may well be to be born into a family of rich parents.

Money can also be converted into human capital. In the good old days, we have a very standard education system designed for the masses to churn out obedient factory workers and employees. Nowadays the rich can tailor a private education for their progeny in the form of more private, independent or autonomous schools. This does not even consider the power wealthy families have to get business contacts for their younger generations of heirs.


Enterprising
Enterprising people are currently having their hey-day being touted and widely promoted by the mass media. Enterprising individuals are the new heroes of our generation, being able to become fabulously wealthy and be able to provide jobs for other people in this country. Increasingly, society wishes to groom a new elite in the form of entrepreneurs, but there is of course, a persistent dark cloud when it comes to starting a business. Business can succeed beyond the owner's wildest dreams but it can also fail.

But some fail more painfully than others.
Brains can allow you to get cheaper funding for your business. Why do many venture capitalists cluster around universities waiting to pounce on the latest technological ideas? Money will give you a cushion to deal with the possibility of business failure. If you are rich, daddy can bail you out.

It's easy to be enterprising once you have the other two Es in place.


Getting the three E's in place
You can choose your reaction upon your realization of the three E's in Singapore society. You can be cynical about it and withdraw from the game of Life or you can ask yourself the much more empowering question: How can I attain the three Es in life ?

As it stands, we do have some influence over how we attain these three facets of success. We can work hard to become educated. By studying businesses, showing an interest in people and taking calculated risks, we can become more enterprising. Many have risen from a humble background by saving and investing an endowment for themselves.

Thus, the rules of life do not change. It is your duty to play the game of life well no matter how well your starting hand looks like.

This way, while you may never be able to attain the success of folks like Stanley, we can come close to being able to do so and earn the admiration and respect of our peers.

@luXy tl;dr
You must log in or register to reply here.