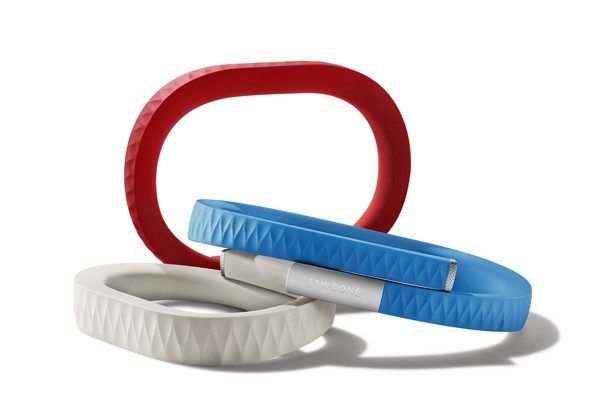 ​
Back in July, Jawbone did something puzzling. The company, best known for its Bluetooth headsets, teased a photo of a colorful wristband called the Up -- a deceptively simple thing that could purportedly track your eating, sleeping and exercise habits. The outfit left out a few teensy details: the price, shipping date and, the biggest riddle of all, how it works.

At last, the company's ready to talk specifics. We just got word the Up will be available in the US November 6th for $100, and will continue its world tour on the 17th. With that price, it's well-matched against the clip-on Fitbit Ultra tracker, and indeed, they have some key features in common -- namely, a step counter and a few requisite social networking features. But with a sensor that knows when you're in deep sleep and a mobile app that can identify photos of food, it has a few unexpected tricks that could give devices like Fitbit a run for their money.


Like Fitbit, Up sports a step tracker that keeps tabs on distance, pace, calories burned and active time versus hours logged in front of the computer sedentary periods. The band, available in seven colors, is also sweatproof and water-resistant, though the jury's out on how comfy it'll be during an hour-long run.

But its killer feature could well be a sensor that detects what stage of sleep you're in, and uses a vibration motor to wake you up when you're in a light sleep state. So, if you set your alarm for 7:30, it might rouse you slightly earlier if it knows your brain isn't availing itself of some sweet REM. Like Fitbit, it also knows how many hours you slept and how long it took you to nod off. Once you're ready to upload this treasure trove of data, just pull off the end of the wristband to reveal a 3.5mm plug. It charges via USB, and you should be able to squeeze out seven ten days of use on a charge, according to Jawbone.

Tying it all together is an iOS app that lets you snap photos of the food you're about to eat and parse the calories based on the image. (What? Ignoring weird looks while you're photographing your fries builds character.) Of course, it also has a requisite social networking component, in which you can challenge friends to contests -- say, "Who can do the most walking today?" -- and view stats on a leader board. (Fitbit's web app offers a good deal of community features too, for what it's worth.) The bad news: it's only available on iOS, and no, you can't access this data via a website. What's more, it's unclear when an Android version will follow, except that it'll arrive eventually. Fitbit, while lacking in apps, at least has a mobile website that will load on any device.

If it really does what it claims.. I will consider buying it. Would really come in handy for tracking down your body statistics.

But its killer feature could well be a sensor that detects what stage of sleep you're in, and uses a vibration motor to wake you up when you're in a light sleep state. So, if you set your alarm for 7:30, it might rouse you slightly earlier if it knows your brain isn't availing itself of some sweet REM.
Click to expand...

Actually there are devices that can do this alr. Like the "sleep cycle" iOS app. I tried it for. Few days and it works. However it's not practically to put your phone under your pillow for the long haul. This bracelet may be the better solution

strange name for such a bracelet.. jawbone. lol i wonder what was the inspiration behind that title.
K

I was on the Jawbone website earlier today looking at this. I don't use a smart phone or other bluetooth enabled device, so I wouldn't be able to use any of their products. I don't really like the idea of having something tracking my every move either, in case someone got that data and used it against me.

karmaman said:
I don't really like the idea of having something tracking my every move either, in case someone got that data and used it against me.
Click to expand...

Your handphone is already a device someone can use to track your location .. and more: http://gymkaki.com/threads/your-smartphone-could-be-secretly-recording-all-your-actions.1922/

bump. any news on this in SG?

prosu said:
bump. any news on this in SG?
Click to expand...

Nope. buy it over ebay or amazon :/

A troubling number of UP wristbands have failed, however, possibly due to a problem with capacitors in the devices designed to carefully track body movements.

Flaw makes Jawbone UP wristbands go down - Yahoo! News Singapore
You must log in or register to reply here.