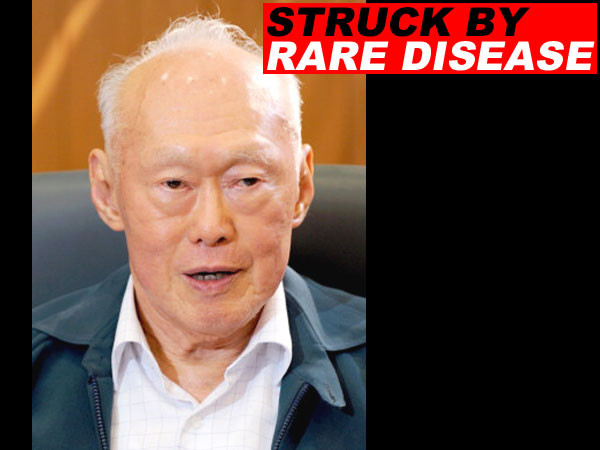 Former minister mentor Lee Kuan Yew has been diagnosed with a rare nerve disease. His condition was revealed by his daughter Ms Lee Wei Ling in a column in The Sunday Times today. Mr Lee had asked her to write about his condition after seeing Ms Lee's recent articles that talked about his deteriorating health following his wife, Mdm Kwa Geok Choo's death.

Mr Lee has been diagnosed with a condition known as Sensory Peripheral Neuropathy. According to Ms Lee, the condition causes "the conduction of sensation from his legs to his spinal cord to be impaired". She noted that the condition has made his walking unsteady, "as many Singaporeans have already noticed".

Ms Lee also reveals that Mr Lee's condition had deteriorated within just one month, after his trip to Moscow in September 2009. Tests conducted at the National Neuroscience Institute, which Ms Lee heads, showed that the nerves in Mr Lee's legs were "not working as they should" and confirmed that he was suffering from the rare disease.

Ms Lee added, "Being deprived of sensation from his legs means he finds it a challenge to balance, thus his unsteady walk."

Ms Lee also suffers from the same disease, and had known about it when she suffered an attack when she was hiking in New Zealand in 2005.

The disease is a result of damage to the nerves caused by a variety of factors including inherited genes. Symptoms of the disease include numbess, tingling, pain and a possible loss of balance.

hope he is well.

“I have no doubt at all that this has not affected my mind, my will nor my resolve,” the newspaper quoted Lee as telling reporters yesterday. “People in wheelchairs can make a contribution. I’ve still got two legs, I make a contribution.”
Click to expand...

his fighting spirit is really high. this disease will not bring him down

firstly, lol @ the picture.
its just a matter of time. He looks uber frail.
Nice quote

@koreanfanboy what so funny about the picture
You must log in or register to reply here.