No TV for Children Under 2? 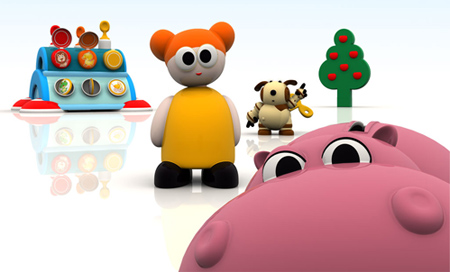 Hippa Hippa Hey, one of the many shows directly marketed to toddlers​
In the past few years, a new kind of specialty TV channel has been inserted in regular programming: TV for toddlers. Networks such as BabyTV air shows that were devised for and aimed to children under two. Most parents who have watched these strange, hypnotic shows are amazed by how their babies are mesmerized by them. But one cannot help but ask: Is it healthy to place a baby, who is barely aware of its surroundings, in front of an 51″ plasma TV with CGI cartoon characters bouncing around in high definition and chanting strange things? Are these shows “educational” or mind-numbing hypnosis sessions scientifically devised to subliminally capture babies’ attention?

No matter what’s the answer, a group of doctors agree that TV is simply not good for babies. If it already makes fully grown adults dumber, one can only imagine what TV does to baby with soft brains who don’t even have the motor functions to stand up straight. Here’s an article summing up a study by the Journal of Pediatrics.

Kids under 2 should play, not watch TV, doctors say

Children under age 2 should avoid watching TV as much as possible, according to a new policy statement from the nation’s largest group of pediatricians, who suggest the tots should play instead.

The idea that TV programs are beneficial to the learning of children this young has not been proved, the American Academy of Pediatrics says. In addition, TV viewing may lead to sleep problems and a delayed use of speech in young kids, recent research suggests.

Even merely having the TV on in the background may be less than optimal for a child’s development, the AAP says. Background television may distract from playtime activities that benefit children’s learning. And it may distract parents, preventing them from speaking and interacting with their kids, the AAP says.

However, the recommendations run counter to what most parents actually do. About 90 percent of parents say their kids younger than 2 watch some type of media, according to a 2007 study. By the age of 3, nearly one-third of kids have a TV in their bedrooms.

As a compromise, parents should come up with a strategy to manage TV viewing in their young children, the AAP says. Ideally, when kids younger than 2 watch TV, their parents should watch it with them.

The new policy statement was released today (Oct. 18) here at the AAP National Conference & Exhibition. The policy statement specifically addresses the viewing of TV programs and does not comment on the potential benefits or risks of using phone applications, video games or other programs a child may encounter on a screen.

The AAP first released guidelines on media use by young kids in 1999, concluding that media use by kids under 2 should be discouraged. Since then, a lot more research has been done on the subject. The AAP reviewed this research for its new policy statement and essentially came to the same conclusion.

That’s not to say that kids can’t benefit from TV. Children older than 2 can improve their language and social skills by watching TV, some studies have shown.

However, in order to gain a benefit from a TV program, kids need to be able to understand and pay attention to it. Young kids may lack the mental ability to comprehend what they are watching. In fact, two studies have found that, for kids 2 and under, watching programs such as “Sesame Street” may have a negative impact on language development, the AAP says.

“There’s a great developmental digital divide,” Dr. Ari Brown, a pediatrician in Austin, Texas, and lead author of the new policy statement, said at a news conference. Studies show that children under 11/2 years old have the same reaction to a TV program regardless of whether it’s going forward or backward, Brown said. In contrast, older children prefer to watch the program forward.

All in all, instead of spending time in front of the TV, young kids are likely better off spending that time engaged in unstructured play, which promotes creative thinking, problem solving and reasoning skills.

If parents choose to let their young kids watch TV, they should set limits, the AAP says. They should also avoid placing a TV in the child’s bedroom

Parent should be aware TV programs may affect their child’s development, even if the child cannot understand the program. They should turn the TV off if no one is watching it and try to watch their adult programs when the kids are not around, Brown said.

If parents cannot play with their kids directly, even having the children play with toys by themselves can be beneficial, the AAP says.

The AAP also recommends further research in this area to examine the long-term effects of early TV viewing on toddlers’ development.

The new policy statement will be published in the November issue of the journal Pediatrics.

- MSNBC, Kids under 2 should play, not watch TV, doctors say

young kids are so preoccupied wth watching tv shows on their parents' ipad at eateries. this might screw them up but at least its easier to feed them like this compared to them running around playing catching
Z

I swear, everything is bad now! I remember that not long ago it wasn't unheard of for a child to grow up on the tv or the radio, I think that the stimulation can't hurt them, but then again I am not an expert!

Plenty of "conspiracy" theories like this are popping up nowadays. I guess we gotta take em all with a pinch of salt.

If i wear to ever have kids, which i wont, but still, i would let them watch TV before they were 2 years old.

I did, my brothers and sisters did, i really don't believe it does any harm at all.

We don't let our toddler watch much TV, but he does get to see his favorites on the computer for an hour every day or two. He loves "Cars" and asks for it. I think as long as he mostly gets a lot of active playtime in, he is ok spending a little time watching something while we get chores done or cook dinner or whatever.

Kids should be more active to develop motor skills, remain healthy and fit. And also they need to be exposed on some educational materials to learn new things. I think a little exposure on TV (in a proper distance to avoid radiation) could just be okay specially watching educational and fun shows designed for kids. Always have parental guidance so that they will grow and understand more those different things.

I think it is the fact that toddlers are watching TV and not doing play which is essential for growth and learning. Little babies shouldn't be watching TV at home, maybe if they are out and need to be quieted it would be fine.
You must log in or register to reply here.