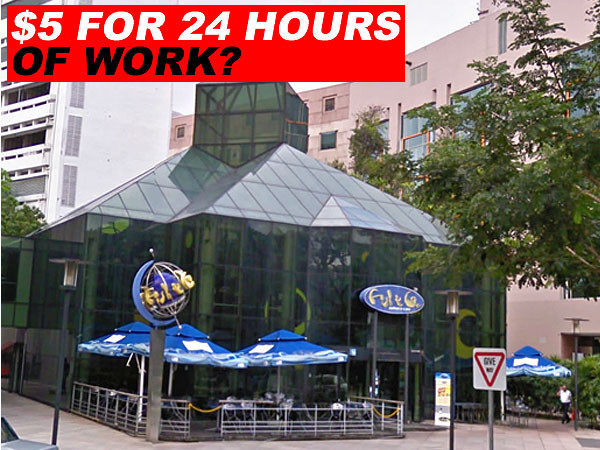 A father has exposed popular restaurant Fish & Co. for what he claims are exploitative practices.

Mr Thomas had written to the Stomp website to explain how his daughter was supposedly exploited after applying to work for Fish & Co.

His daughter had just finished her GCE 'O' Levels and is working part-time to earn extra pocket money during her school holidays.

The teen was first promised a wage of $5.50 an hour, but was told on her first day that she had to clock a ten-hour no-pay probation period before she can be hired as a part-time staff.

After working for free for six hours on the first day, she was told on her second day of work that the no-pay probation has been revised to 24 hours.

After this probation period, the teen will be paid $35 for the earlier 24 hours of "training".

But at this point, they have to return $30 as deposit to receive work-required uniforms and aprons.

Mr Thomas feels that the company should not be exploiting students this way. He also believes that the students do not realise that they are being exploited. His daughter, together with her friends, have since stopped working for Fish & Co.

However, she has already worked for 12 hours over two weekends with no pay.

Many netizens are outraged over what appears to be the exploitation of students. One netizen, "bluehawk168" commented, "Omg! Just imagine after every 24 hours, they tell the students they're not good for the job. Hey, they'll have saved lots of money! MOM, quickly take action!"

Netizens are largely skeptical about the restaurant's "outrageous" rules, and have expressed disappointment and disgust at the company.

Fish & Co. has taken notice of the matter, and has posted on the Stomp website that it will be "clarifying the matter" with Mr Thomas.

Do you agree with Mr Thomas that Fish & Co. is exploiting students?

besides exploiting for hours, they still exploit them to sing silly songs for birthday kids

That's just bad. Even if it's a part time job and those are students, they deserve to get paid for their work rightfully.
You must log in or register to reply here.