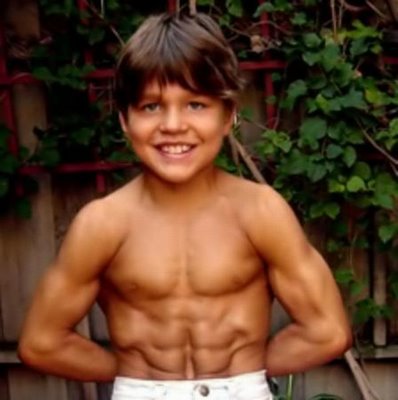 Richard Sandrak (born 15 April 1992), also known as Little Hercules, is a Ukrainian-born, American bodybuilder, martial artist and actor, renowned for his muscular physique at an extremely young age. He is probably best known for his appearance in the documentary The World's Strongest Boy, which has been shown on several TV channels across the world, and for his dedication to bodybuilding

However, this diehard ambition for achieving such a perfect body was not totally self-motivated. His father, Pavel Sandrak, a martial arts world champion, and his mother, Lena Sandrak, an aerobics competitor, both pushed their son to the limit to become a child prodigy.

At the age of two Richard and his family moved from a small village in Ukraine to the United States where his training began. His parents started him out with light exercises and martial arts techniques which soon progressed into more intense bodybuilding training. Experts are almost unanimous in their observations that Richard was almost certainly on some sort of anabolic steroid, but Richard and his parents vehemently deny this. At the age of six Richard was maxing out at 180 lbs on standard bench-press, during this early age he claimed his title as world’s strongest boy as well as his nickname “little Hercules”. As his reputation precedes him, at the age of eight he was bench pressing 210 lbs. The young boy had become a world-wide icon as he began traveling across the country taking place in competitions, promos for nutrition products, as well as photo shots for numerous magazines. He also appeared on several TV and radio station broadcasts, one being The Howard Stern Show. As he got older his career slowly died down. His most recent Hollywood debut was a casting role in the 2009 film, “Little Hercules”. Richard, being in his late teens still trains hard, but after being separated from his father he has cut his training down to four days a week 90 minutes a day.

THAT is some insane abs for a kid!
You must log in or register to reply here.