Discuss SAF to ease ban on camera phones in camps 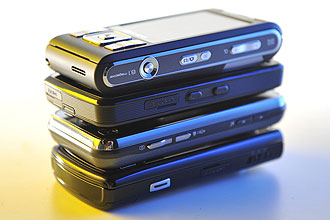 The Singapore Armed Forces (SAF) is reviewing its blanket ban on all camera- equipped cellphones inside military camps, paving the way for restrictions on such phones to be eased.

The Straits Times has learnt that under proposed changes, all SAF personnel will be allowed to bring these phones into all military installations islandwide, so long as the cameras inside them are removed.

Responding to queries, the Ministry of Defence (Mindef) confirmed yesterday that it is 'exploring ways' to allow its personnel to use the camera-equipped smartphones, 'while maintaining our current security policy on disallowing personal image-capturing devices to be used on Mindef and SAF premises'.

Spokesman Desmond Tan also said the review is being done as Mindef recognises the 'potential benefits provided by smartphones'.

Servicemen/women would be allowed to bring in camera phones, provided that they:

a) fill up Form A (annex A,B and C) and get their respective superiors to approve.

b) After the above forms are duly signed, servicemen/women are to bring the forms, together with their camera phones, to the security department for clearance. This process will normally take 3-6 months.

c) After approval is given, servicemen/women are to bring their camera phones, together with the duly signed forms and clearance from the security department, to the designated vendor for the removal of the camera. This process usually takes 3-6 months. Servicemen/women are advised that such removal is done solely at their own risk (meaning, your phone spoil your own problem).

d) After camera is removed, servicemen/women are to bring their non-camera phone, duly signed forms and clearance from the security department, to another designated vendor for the installation of approved anti-virus software. Please note that such software is installed solely at your own risk (meaning, you kena virus, or your phone hangs during installation, your problem). This process usually takes 3-6 months.

e) After the above steps have been completed, servicemen/women are then to bring their non-camera smartphones back to the security department for verification. If verfication process is cleared, he/she will be issued a seal to be pasted over where the camera used to be. Servicemen/women is advised that if the seal is broken, he/she will have to repeat the above steps.

f) Servicemen/women are also advised that the seal is only valid for 6 months.

The Singapore Armed Forces (SAF) said on Monday that it is reviewing the ban on the use of camera-equipped mobile phones and is looking into how such phones could be used inside military camps.

Under proposed changes, army personnel will be allowed to bring the phones into all military installations islandwide, as long as the cameras inside them are removed.

Spokesperson for the Ministry of Defence (Mindef), Colonel Desmond Tan, said that it is “exploring ways” to allow its personnel to use the camera-equipped smartphones, “while maintaining our current security policy on disallowing personal image-capturing devices to be used on Mindef and SAF premises”.

He said that the review is being carried out as Mindef recognises the “potential benefits provided by smartphones”, reported The Straits Times.

Present regulations bar servicemen from bringing in camera phones, and because of this many carry two phones – one for in-camp use and another outside.

Colonel Tan also confirmed that selected commanders and operational personnel have been issued with “modified smartphones” – with the cameras removed – on a trial basis.

It is understood that modified iPhone and Android handsets were issued earlier this year to allow Mindef to examine if its security measures are good enough to deal with phones that pose higher risks.

Several changes were made to each modified phone, including having the camera removed and replacing the rear casing with one that did not allow for use of the camera lens.

The new rules could be announced at the end of next month, and the SAF is believed to be looking for vendors to assist in removing cameras from the handsets.

Although it is unclear how much such a service will cost, businesses are charging around $200 to remove cameras from mobile phones.

The changes will also allow smartphone users to tap into the Wi-Fi networks that have been installed in more camps and surf the Internet.

This move is also seen as a turnaround from Mindef’s tight rein on the use of new technology and new media in the interest of security.

In 2007, it banned the use of camera phones within camps and training areas after photos of training activities appeared online. Two years later, military personnel were warned not to form online military groups on social networking website Facebook.

This shd be done right from the start damnit

apa siol as usual so leceh just to get the phone approved
Reactions: kr3w

YES!!! Thats the point! Straits Times aritcle was kind of misleading on its title
Reactions: clan_NEt and kr3w

joey_tan said:
apa siol as usual so leceh just to get the phone approved
Click to expand...

SOP here SOP there. So many SOP of course leceh lorh
You must log in or register to reply here.