Video Singapore on The Simpsons 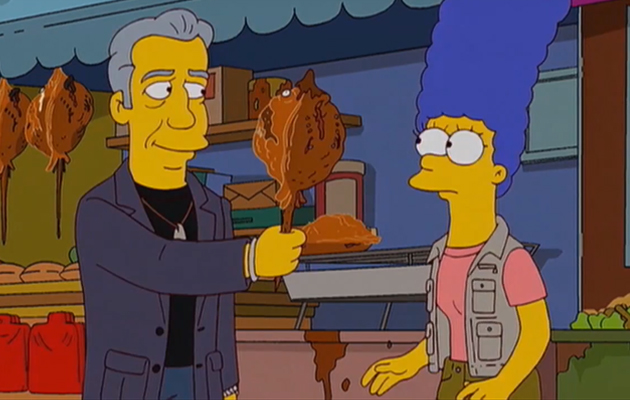 Singapore's (in)famous street food has made its mark yet again -- this time on none other than award-winning U.S. cartoon series "The Simpsons".

In the long-running cartoon's most recent episode entitled "The Food Wife" that aired in the US over the weekend, Singapore's street food culture is spoofed in Marge Simpson's dream sequence.

In typical irreverent fashion that takes aim at the food pop culture scene, an exaggerated caricature of food critic Anthony Bourdain is pictured in a Singapore street food market scene asking Marge to "try this hang he kway chap" in a heavily accented American-twang.

Before she can take a bite, her husband Homer bounces past on a bouncy ball and gobbles down the delicacy in one gulp, dashing her foodie dreams.

The dream sequence ends with an array of famous food characters such as KFC's Colonel Sanders, the Swedish chef from The Muppets and even Britain's Gordon Ramsay shaking her out her sleep.

The whole sequence lasts about 1:30 mins and hey, I'm not even sure if "hang he kway chap" even exists, but the fact that Singapore food is even mentioned on The Simpsons is k-e-w-l.

This is a cartoon that has become the pop culture barometer of America, if not the world, having won over 27 Primetime Emmy Awards since it debuted as a series in 1990.

So "hang he kway chup" anyone?

So now khaki shorts and slippers are our local attire....

hahah they chose pig organs too. shouldn't it be chilli crab or chicken rice
You must log in or register to reply here.