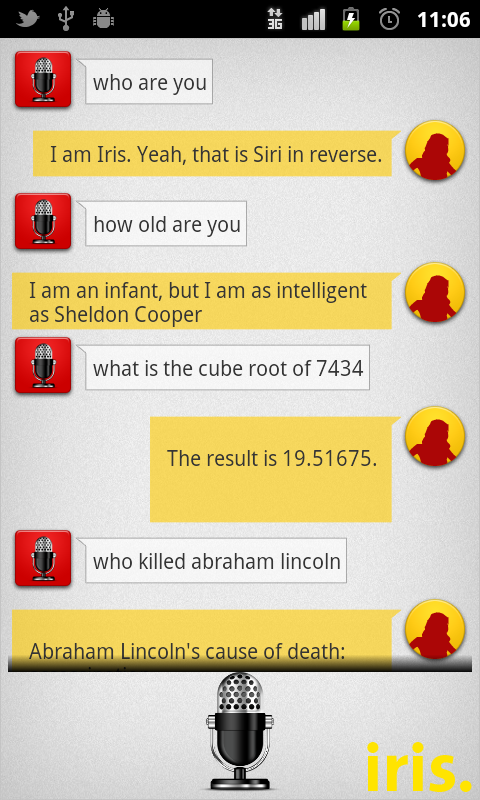 If there’s one thing that gets under the skin of Android fans more than anything, it’s Apple receiving glowing praise for something Android already does, or could easily do if anybody just put their mind to it. Not to be out-shined by the Siri voice recognition assistant, a major selling point of the new iPhone 4S, one Android developer team took it upon themselves to create an Android alternative, and did so in a mere eight hours, just to drive the point home.

The result is Iris (“Siri” backwards), created by Android dev team Dexetra, which says it was inspired by “the influx of tweets and posts on the ‘Awesome Siri’” that began flying around the web by the truckload.

“Suddenly, I got the urge to do something similar for Android,” writes Dexetra on its blog. “Since we have been working on NLP and Machine learning for over an year now, I had a crazy belief that I could pull this off. Somehow I managed to write a tiny engine that could answer your questions, digging the results from the web.”

After only eight hours, Dexetra had “created a decent layout and design,” and added voice input, text-to-speech and “a lot of heuristic humor.”

Following a wave of positive feedback, Dexetra submitted Iris to the Android Market, where it is now available for download.

Users should be aware that Iris is still very much in alpha, and requires “Voice Search” and “TTS Library” to be installed on the handset for Iris to work properly. And even then, it’s still a bit quirky; as expected for an app developed in so little time, Iris doesn’t work nearly as well as Siri, which has draw praise across the board for its surprisingly solid functionality. Still, if Iris – or something like it – can get up to par with iPhone 4S-exclusive Siri, it would remove one of the primary reasons to purchase the new Apple handset, which is faster than the iPhone 4, and has an impressive 8-megapixel camera, but is already being outdone by a number of Android devices with better specs.

hahahaa IRIS... really sound like a mockery of SIRI man

Android is like windows mobile in the past. Got alot of apps here and there. It can do more than apple devices but doesn't work as seamlessly or beautifully as apple

I remembered quite a few years back, window mobile already had a voice recognition app. It can do stuff like send a message or call someone by ur voice. But the app cost like 49us bucks and was so not user friendly. Adding to that was there was no "AppStore" in the past. U have to download the .cab file and xfer it to ur device. Lehceh to the max. Then apple came along and used those technology and added nice packaging to it. And there u go, u get the iPhone, u get Siri.
Reactions: prosu

Well the consumer doesnt give a crap about who came up with the technology first. All that matters is does it work well and would using it make them look cool.

Yup, packaging the product, making it appealing to the masses is the deal breaker, less so the actual functionality - unless the differiantiating function is actually a ground breaking one. People really want to be associated with something that can make them look 'cool' or 'hip', and Apple does that really well. They excel in creating that great consumer desire for their products. Check out this article depicting the true practicality of an iPad. I find it pretty informative without going too technical. The iPad actually doesn't seem that all awesome after all =X

windows mobile is damn lag. and a simple sms function so hard to use

why bother with imitation? just get the real deal eh? get an iphone
You must log in or register to reply here.