Sitting to poop? Science says it's bad for your health 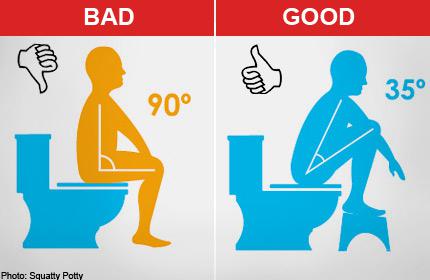 Do you normally sit on a toilet bowl to poop? If you answered "yes", then like millions of others out there, you are doing it wrong.

According to experts, squatting is the proper and recommended way to pass motion, wonderhowto.com reported. The article quoted Henry L. Bockus in Gastroenterology as saying: "The ideal posture for defecation is the squatting position, with the thighs flexed upon the abdomen. In this way the capacity of the abdominal cavity is greatly diminished and intra-abdominal pressure increased, thus encouraging expulsion ...".

When you poop, the puborectalis muscle loosens its hold on the rectum to allow waste to flow out. However, in the sitting position, the hold is only relaxed partially. In the squatting posture, the hold is completely relaxed, allowing for a smoother passage.

Also, the pressure of thigh muscles against the lower abdomen helps with exertion and elimination.

The sitting posture actually keeps us in ‘continence mode’. This makes elimination difficult and incomplete, creating the need to strain.

"The extra time spent in the sitting posture is necessary for excessive straining in order to push the feces through almost right rectoanal angle, while in the squatting posture signiﬁcantly less straining is necessary as the feces are pushing out along the open outlet due to straightening of the rectoanal junction," said a 2003 study published in the journal of Digestive Diseases and Sciences.

The study goes on to state that bad bathroom posture plays a bigger or equal role in ailments such as constipation, hemorrhoids and appendicities than a lack of dietary fiber.

another article to this:

Good post. I think we need to build awareness from our childhood. If we would able to teach our children regrading how to use toilet in proper way then this problem would be solved easily.

Most children begin to show these signs between 18 and 24 months, although some may be ready earlier or later than that. And boys often start later and take longer to learn to use the potty than girls.

Instead of using age as a readiness indicator, look for other signs that your child may be ready to start heading for the potty, such as the ability to:


Hope so it would help.
You must log in or register to reply here.